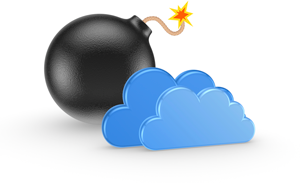 Cloud servers provide a turn key solution to a lot of problems, however they can quickly become an expensive crutch that hides problems rather than solving them.

A lot of companies start out with one or two cloud servers then increase resources on them or provision more as their product grows. Quickly this can turn into spending hundreds of dollars for mediocre performance and no redundancy.

Dedicated servers (also known as “real” or native servers) are cheaper than most of our client’s realize, and their performance much better than even a dozen cloud server instances.

The virtualization craze started in the late 2000s and continues today. Cloud and virtual servers make a lot of sense in a lot of situations but they’re not a magic bullet.

The biggest illusion is that cloud servers are inherently highly available. Unless the cloud service provider is running a technology like V-Motion or other similar high availability system, if the hardware your cloud server is running on (which is a single “real” server ultimately) dies, your VM will go offline as well. Almost no cloud server vendor we know of provides this option and none provide this by default. If you don’t know, the answer likely is that you’re no better off than a single dedicated server is in this regard.

Lots of cloud server providers have APIs to dynamically bring up and down instances dynamically as needed (i.e. in response to load). Developing a system to properly leverage this for your specific use case can quickly cost more than any potential savings. And all of this further traps you to that providers specific platform. There is also additional overhead in complexity and troubleshooting a dynamic environment like this. There are niche cases where this kind of auto-scaling makes sense but they are extremely rare, despite these features being advertised as something most customers would use.

Initially cloud servers can be very cost effective, but as your needs grow adding resources can quickly become expensive because most providers don’t allow you to just increase a specific resource, especially RAM. You end up paying for additional CPU and disk space simply because you need additional memory. And it gets expensive quick, especially when compared against dedicated servers.

A-Team Systems specializes in helping clients take advantage of the performance dedicated servers by designing and implementing superior architecture that is redundant and scales. There are usually three factors that push people to migrate away from cloud servers to dedicated servers.

As datacenter pricing continues to fall the point at which it makes sense to switch to dedicated servers lowers. We take many factors into account when making our recommendations but our current rule of thumb is to closely review a client’s deployment if they’re spending $300 or more per month on cloud servers.

Cloud servers are inherently slower than dedicated servers, especially with regard to I/O because they’re running on top of another piece of software. Combined with the pressures of pricing that can result in RAM-deficient setups, this can affect all aspects of an application’s performance. There is also the issue of a provider over-provisioning a server causing your cloud servers to slow or hang because of other clients.

If high availability is a concern then dedicated servers provide maximum reliability, flexibility and security.

What’s Right For You?

Cloud servers have many advantages, however so do dedicated servers. A-Team Systems can help you identify what makes the most sense and if desired transition to high availability architecture starting at just two physical servers.