With years of building and testing servers in various configurations we have always suspected hardware RAID was not all that it’s cracked up to be.

FreeBSD’s GMIRROR and ZFS are great, but up until now it’s been a gut feeling combined with anecdotal evidence.

Today, we change that.

The tests were administered on this system:

Each test was run twice and the results averaged. The test procedure was:

4. Mount new file system and cd into that directory

It is important to note, along the lines of what Brendan Gregg says in his talk on performance analysis, that 100% of benchmarks are wrong. The tool we’re using (bonnie++) is designed to overload caches and other techniques to produce a “worst possible case” throughput figure. This is incredibly “unfair”, especially to things like ZFS, where it’s ARC and LZ4 compression show massive real world performance increases.

Additionally due to how LZ4 can skew benchmarking data that is not properly randomized we left it off in our tests but in the real world we highly recommend it under almost all situations including DB servers. The bottom line is that ZFS is likely to perform better than these tests reveal under real world situations.

In these tests we used a UFS (FreeBSD’s native filesystem) volume on top of the following block storage providers: 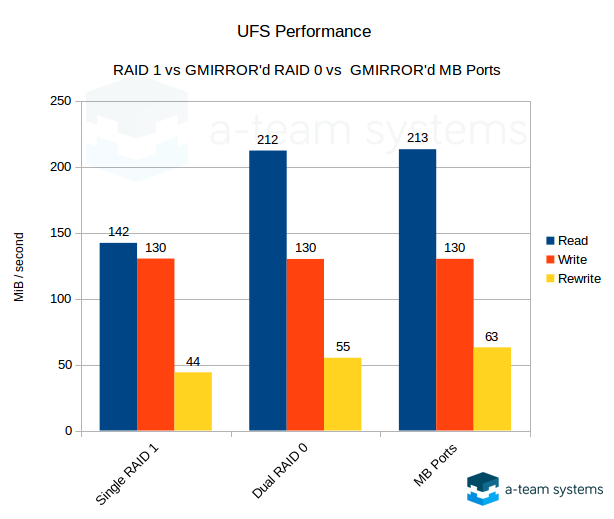 As you can see here hardware RAID loses across the board. GMIRROR clearly does a much better job of utilizing both disks for reads and it shows, regardless of motherboard or RAID card ports are used.

Results: With UFS hardware RAID is not only a waste of money, it’s also almost 50% slower for reads.

In these tests we used ZFS in one of the following configurations: 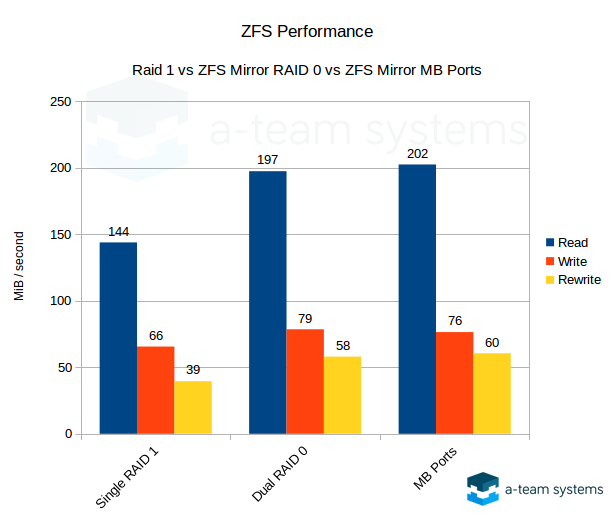 Results: ZFS on top of a hardware RAID 1 was never a great idea, but this shows it clearly. Again it’s a waste of money and it’s 37% slower. You can also see that ZFS has slower writes than UFS, due to it’s verification, checksuming and the nature of COW (copy on write) filesystems.

With these tests we conclusively show that, for read operations, hardware RAID 1 is slower. At best it is a little slower and at worst a lot slower than both a ZFS mirror or UFS on top of a GMIRROR provider. For write operations ZFS performs slower but you gain peace of mind knowing the data you’re reading has been verified.

Here is what we’ve taken away from these results: Hardware RAID cards should only be used if you need a large volume of SATA/SAS ports and your motherboard does not have enough (and a few dual port PCIe cards won’t help enough). In this case the card should be configured as JBOD or one-RAID-0-per-disk. Do not use them for actual RAID functions, just as a way of getting more SATA or SAS ports. You’d then use GMIRROR+UFS or ZFS on top of this.

Hardware RAID cards also have lock in: You can’t move disks between RAID card manufacturers and sometimes even between models of the same manufacturer. This means you can’t just move the disks to another server if your card fails.

With that in mind, best practice storage under FreeBSD comes down to choosing between either GMIRROR+UFS or ZFS. Both filesystems are very mature under FreeBSD and are well supported. UFS is a rock, and FreeBSD is a Tier 1 OS for ZFS support. Both have near-comparable read speeds.

Let’s review some of the differences however:

So … Which is Better?

It really comes down to your write load, data size, and budget. Here is a simplistic summary of our feelings:

If you don’t foresee constant, intensive (50+ MiB/sec) writing, ZFS (especially with compression enabled) is going to be better.

If you will see intensive writes, still stick with ZFS but switch to SSDs. They will greatly reduce the overhead that ZFS’ checksumming has vs. traditional drives (and everything will be a lot faster, too).

If your data set is too large that SSDs are not cost effective UFS is still a great choice.

A-Team Systems is a proud supporter of the FreeBSD Foundation and many of our administrators are direct project contributors.

8 Responses to “FreeBSD Hardware RAID vs. GMIRROR vs. ZFS”